Data shows that RHNA rules are just impossible without complete urban transformation. What was Wiener thinking?

If San Francisco is going to rely on private for-profit developers to build most of its new affordable housing through inclusionary mandates, the amount of new market-rate housing will have to more than triple what state currently requires.

San Francisco won’t meet the Regional Housing Needs Assessments for affordable housing under inclusionary policies unless developers build 166,000 new units, 120,000 of them market-rate, over the next eight years.

Either that, or the city would have to require that 57 percent of all for-profit units are affordable—or fail to meet the lower-end RHNA goals and greatly exceed the number of luxury units, with the profound gentrification and displacement that would ensue.

I got these numbers from Marc Verville, a retired financial executive, longtime Santa Monica resident and currently a member of the city’s Audit Subcommittee.

He’s run the data that I don’t think anyone else has run, although it’s all based on public records. 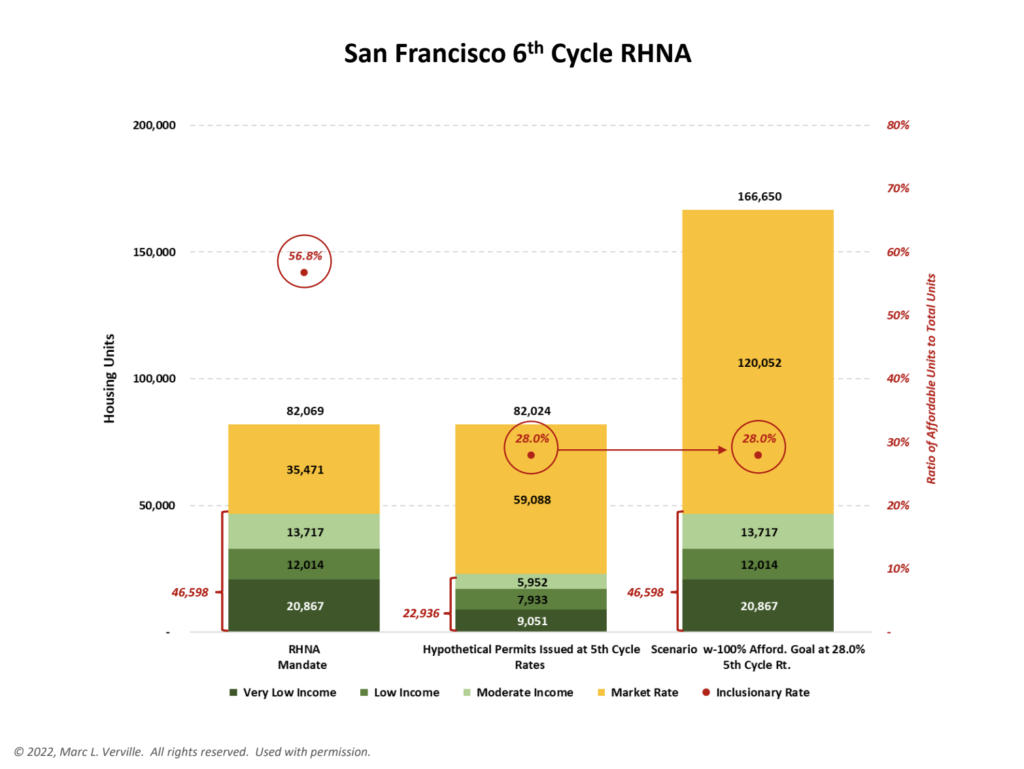 He starts with the idea that San Francisco (and you can apply this model to any California city) requires market-rate developers to include a certain percentage of affordable units in their projects. State laws now allow even more density if the developer slightly increases that percentage.

Verville notes that in the last RHNA cycle, 28 percent the housing built in San Francisco, by all developers, including nonprofits, was affordable.

Then he looks at how many market-rate units it would take to get the city to the state-mandated affordable number.

The current RHNA rules mandate that San Francisco authorize 82,069 units of new housing in the next eight years. Of those, 46,598 need to be below-market-rate.

The state’s rules include zero funding for any of that affordable housing. San Francisco would need $19 billion to pay for it, data shows.

But lots of developer advocates say it’s fine to allow more market-rate projects, as long as they include some affordable units.

Fine: But at 28 percent affordable, the city would need 166,000 new units—120,000 of them market-rate—to reach the RHNA goals. Under that scenario, San Francisco would wind up with more than three times the number of luxury units than the state says we need.

The only way that could possibly happen is if the city allowed wholesale demolition of existing neighborhoods, on a scale that would greatly exceed the redevelopment scandals of the 1950s and 1960s.

And even then, unless most of the units were sold as investment properties and never occupied, it’s hard to believe the developers could make enough profit on that scale, in that short a time, that anything resembling that level of construction could actually happen.

Verville has done the calculations for the state as a whole: Assuming 23 percent affordabililty, the state would need 6 million new units to meet the RHNA affordable-housing goals. 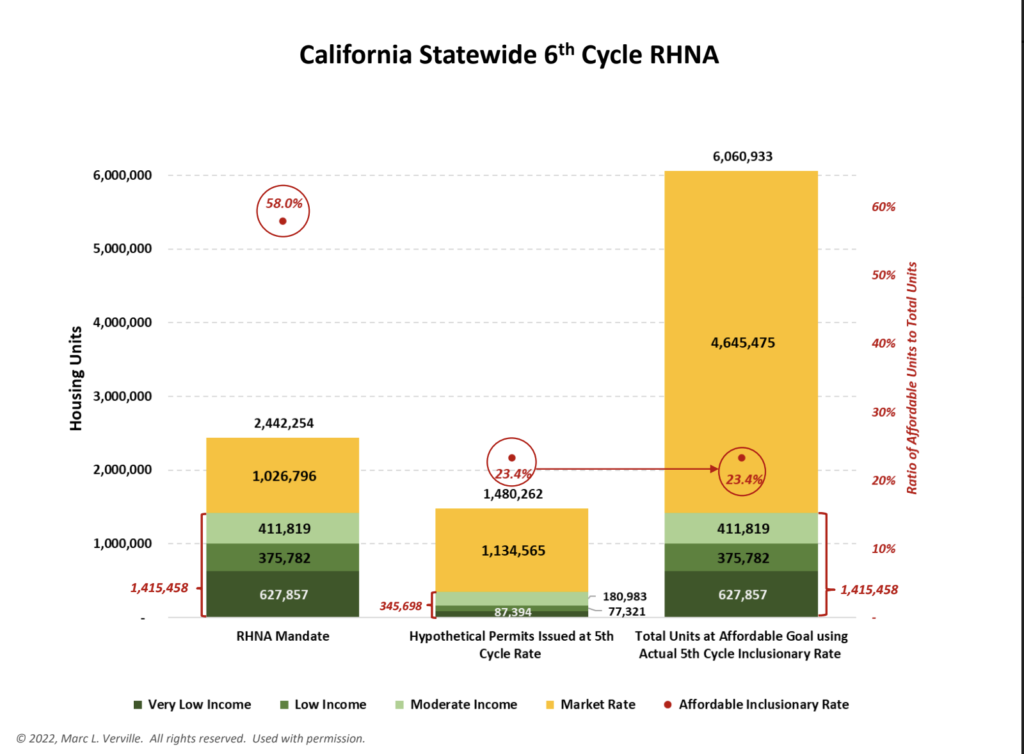 Again: Nobody with any sense believes there’s any way this will happen. The state could eliminate all zoning, repeal CEQA, give developers the green light to demolish everything, bulldoze neighborhoods, destroy every low-income community in the state—and still, we won’t see 750,000 new housing units a year.

Then add in the interesting fact that San Francisco, like a lot of California cities, has actually lost population in the past decade, particularly in the past few years, and that the state is losing and may continue to lose population.

Hardly anyone talks about demolition when they talk at the state level  (and even, to an extent, at the local level) about RHNA goals. In some parts of the state, there’s some undeveloped vacant land that could be new housing, but in San Francisco, that’s pretty scarce: Building something new in this town almost always means taking away something that’s already here.

There are, indeed, a number of large lots that can accommodate housing, like the old Schlage Lock Factory on Tunnel Avenue. But there are nowhere near enough for 166,000 new units.

At a recent supes committee hearing, several board members pretty much agreed: San Francisco can’t accommodate the state’s mandates without accepting bulldozers into the neighborhoods.

I had a conversation some years ago with the former head of SPUR, and he told me that he didn’t understand why so many San Franciscans thought buildings were more important than people; that is, why can’t we just tear down existing buildings and make bigger ones to accommodate more residents?

Two flaws here: One is that more density doesn’t mean more affordability. If demolishing existing housing was guaranteed to create more affordable housing, it would be a much easier choice.

The other: In a housing crisis, the most valuable affordable housing is existing affordable housing. Encourage demolition, and pretty soon developers will start to tear down not just single-family homes on the West Side of town but four-unit rent-controlled buildings with tenants who will have to leave.

We can try to limit that—but then, as with the Ellis Act and Costa Hawkins, the real-estate industry will no doubt get the state Legislature to make it impossible for cities to protect existing tenants. And the Scott Wieners of the world, whose policies would create this nightmare, will wring their hands and say there’s nothing they can do.

Wiener has said he supports repealing the Ellis Act. That’s a safe position because he also knows it’s never going to happen—unless he and the other Democrats in leadership make it clear that there will be no new developer-friendly housing bills, none, until cities are allowed to protect their existing vulnerable communities.

That is not something that any San Francisco representative in Sacramento is saying right now.

The real-estate industry is one of the three most powerful forces in the California Legislature (the other two are oil/gas and telecom). Does anyone seriously think that tenants will get protection from demolition and eviction? (You heard anything about ending fracking in California or imposing an oil-severance tax recently)?

The other element that is missing from all of this discussion: Putting a lot of luxury housing in vulnerable neighborhoods leads to gentrification and displacement. Even if existing residential tenants have rent control, commercial spaces don’t (again, Sacramento: The state bans cities from imposing commercial rent control).

You put a bunch of rich people in a low-income neighborhood and they will want fancier coffee and fancier restaurants and clothing stores, and soon the existing places that offer cheap fare will be gone. Then residential landlords will see property values rising and either sell or try to get rid of their tenants … it’s a classic cycle, and it’s been well-documented over many years.

You can’t put 120,000 new luxury housing units in San Francisco without creating massive displacement—not unless the state Legislature gives the city the ability to protect residential and commercial tenants, and that’s not part of the deal.

The message from the data is clear: Either the RHNA goals, and the legislation behind them, are completely faulty and impossible, and the people who promoted them are delusional … or the state is going to need to put up very large sums of money for affordable housing … or this whole RHNA process is a scam to allow more for-profit real-estate development and speculation that will never lead to more affordable housing.

You want to take a guess?